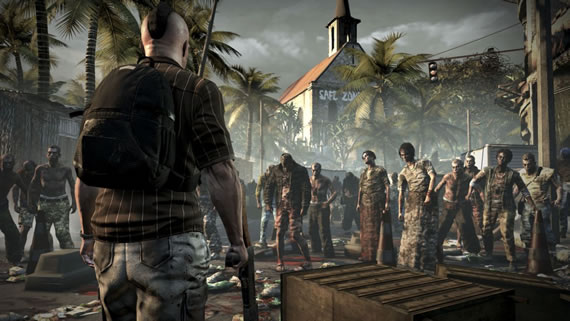 Many are already playing the long-awaited Dead Island and as with most open world games, during our wanderings around the fictional island of Banoi it is possible to find several references and tributes to famous brands of pop culture, such as movies, music and even others games.

In this post are listed some of these mentions and even if you have already finished the game, it is worth taking a look because it is possible that some of them have gone unnoticed.

– The family of the publicity teaser

Most of us only learned about Dead Island after one of the most fantastic trailers ever made for a game and while the final product has little of what was shown in that teaser, the producers didn’t miss the opportunity to pay tribute to that sad family.

In the video below you can see the little girl’s father and mother and if you want to find the couple yourself, make sure you don’t skip the initial part that serves as a tutorial.

– Tributes to other games

While we are playing Dead Island we will be able to see homages to other games, such as weapons called “Master Chef” and “Assassin’s Greed” or when we meet a Thug for the first time, when we will be shown a non-interactive scene similar to the one where we see the first zombie in Resident Evil.

Gotta find’em all – Reference to the Pokemon game. No raccoons in here – Obtained when completing Act II, which takes place in a city and Raccoon City is the city where the Resident Evil series began. Everybody Lies – In reference to Dr. Gregory House. It is obtained by using a large medkit to heal a small wound. Karma-geddon – A small homage to the classic game Carmageddon. Obtained by killing 50 zombies aboard a vehicle. How many days exactly? – Obtained by playing for at least 28 days in clear reference to the zombie movie Extermination (28 Days Later). Light my fire – Obtained by setting fire to ten zombies at the same time. Homage to the song of the same name by The Doors. Can’t touch this – Achieved after killing 15 zombies in a row without getting hit. Reference to the song of the same name by MC Hammer. Hell in Paradise – Homage to the song of the same name recorded by Yoko Ono. simply complete Act I to unlock this achievement. Tae Kwon Leap – In reference to the song “Boot to the Head” by The Frantic and which ironically requires us to kill 25 zombies with punches and not with the kick skill. Learning the Ropes – Evolve up to level 10 to hoter this homage to a sitcom from the 80s. There and back again – Reference to Bilbo Baggins’ memoir, made in the book The Hobbit, by JRR Tolkein. Tis but a flesh wound! – In reference to the Black Knight scene from the movie Monty Python and the Holy Grail. Together in the light – The opposite of the horror series Alone in the Dark. Right 4 Life – The opposite of the name of another zombie game, Left 4 Dead. First! – A reference to the stupid mania of some users of websites and forums who keep putting the expression in the comments to say they were the first. Cardio – The first rule for surviving the zombie apocalypse, according to the movie Zombieland.

The Zed’s Demise weapon is an homage to the movie Pulp Fiction, when Bruce Willis’ character hits a man named Zed with a samurai sword. At the beginning of the game we hear a cry for help from a plane. The name of the flight is Oceanic 1012, in reference to Lost. Then there is a mission where we must find this plane. One of the lab’s janitors is named Joel Dirt, in reference to the movie Dirty Joe, whose character, also a janitor, is called Joe Dirt. The Doctor. Robert West of the GeoPharm lab is a light reference to Dr. Herbert West from HP Lovecraft’s Reanimator, a tale about a doctor who resurrects dead bodies. South of the Overpass Village, on the map in the woods is an abandoned house where a character named Jason can be seen. He holds a machete and attacks anyone who approaches, including zombies. Anyone who has watched any Friday the 13th knows that he is a tribute to the villain Jason Vorhees. In bungalow #4 it is possible to find a zombie named Nenja Samejon, which is an anagram for Jenna Jameson, porn actress, which is even clearer when we consider that she is tied half-naked on a bed, surrounded by camcorders. .

In addition, there are even a series of missions that are named after famous songs or make references to movies and TV series, such as Radio Ga Ga, Knockin’ on Heaven’s Door, Six Feet Under, My Precious… and Toy Story.

But what about you, did you find any other references in Dead Island?