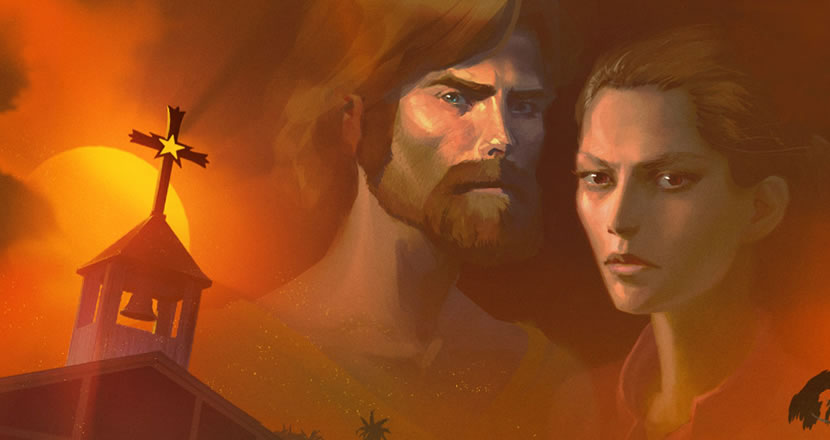 Late 70’s. Charismatic couple Isaac and Rebecca Walker begin to gather followers and, thinking the US government is following them, decide to move to South America. This could very well be Jonestwon’s story, but it is of the game The Church in the Darkness.

Available for PC, Nintendo Switch, PlayStation 4 and Xbox One, the title is the first work by Paranoid Productions, having called my attention for its unusual proposal. In it, we assume the role of the uncle of one of the people who joined the Collective Justice Mission and so we’ll set out to try to find the boy.

As a former law enforcement officer, our character will need to use violence and/or sneak around the mysterious village to find out what’s going on there and if there’s a point where The Church in the Darkness shines, it’s in the constant tension he puts on us.

With the risk of being discovered being always present, we will need to do our best not to be seen by members of the sect and for that we will need to scour the scenarios in search of weapons or items that will facilitate our mission. Furthermore, we will need to decide whether to knock out guards and civilians or simply kill everyone who crosses our path.

Functioning as a typical roguelite, where our death will mean we have to go back to the beginning of the adventure, the main highlight of the game is the fact that the map is randomly generated, but mainly, the way the cult creators’ temperament changes between a game and other.

This makes the motivations for the creation of the Collective Justice Mission to be different and to understand what is happening in the place, we will have to look for documents scattered throughout the scenarios and talk to some people. Altogether we will have 20 endings at our disposal and for those who like to unravel mysteries, the game manages to create an interesting atmosphere with each new foray into the forest.

The big problem is that as much as The Church in the Darkness strives to offer some variety, it won’t be long before we realize that the gameplay is all about sneaking around, avoiding being seen and hiding the bodies. Even the personality variation of the founders of the sect has little influence on the game mechanics and as it is a title with a strong appeal to the plot, those who do not understand English will lose a large part of the experience.

It also weighs against the way it works on consoles, as playing with a controller often proves less accurate and practical than it should. As this probably shouldn’t happen with the keyboard and mouse duo, I tend to believe that the PC has received the best version of the game.

So, in the current state of the game, it gives the impression that its creators haven’t managed to put into practice what they idealized and that’s why I keep thinking that perhaps the best thing is to wait for a sequel or even a large expansion. If that happens, it would be really cool if the developer added the possibility for us to play in someone else’s company, a feature that could make the game much more fun and varied.

When a tutorial amused me more than the game itself