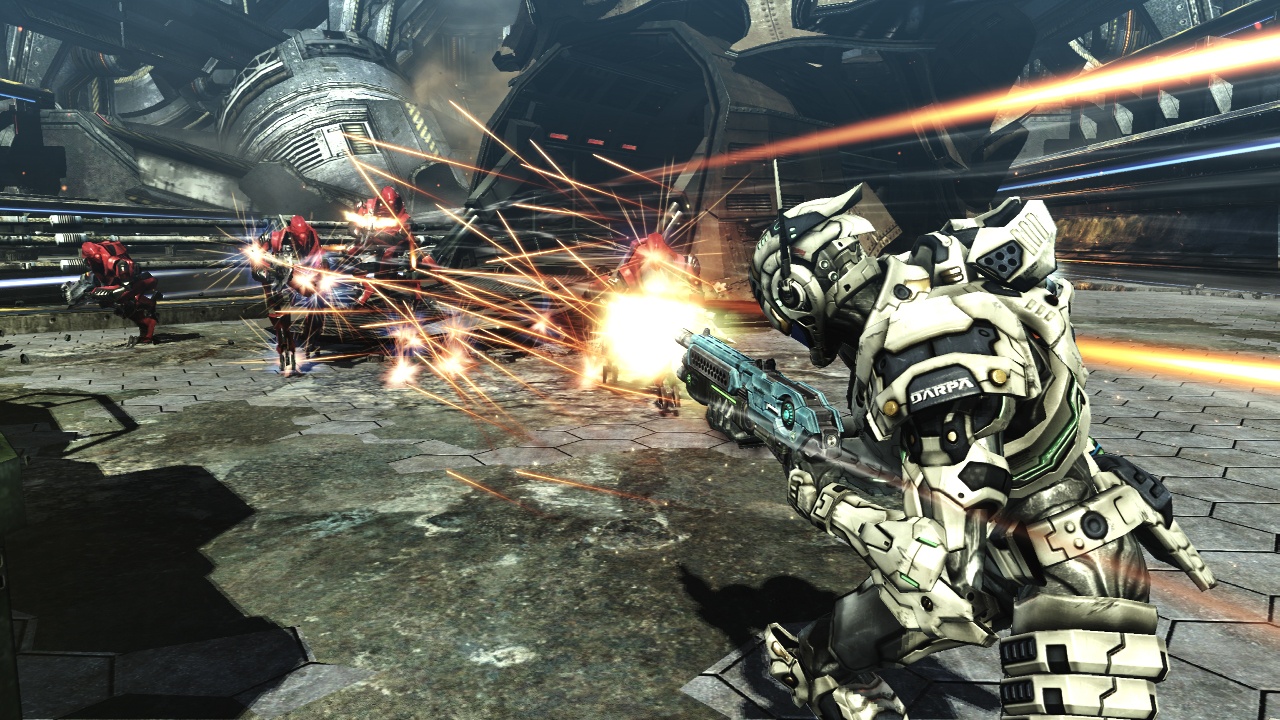 That was an ordinary day in San Francisco, with people going about their daily tasks and the sun shining brightly through the clouds, until suddenly a light rips through the sky and when it touches the ground, a huge explosion kills a large part of the population of one of the main cities in the United States.

Was that an alien attack? Not. Although the shot came from space, was it humans who ordered it, more precisely an ultranationalist group that after a coup d’etat came to control Russia and you know what’s worse? The weapon used belonged to the Americans themselves.

This is how Vanquish begins, a title for XBox 360 and Playstation 3 where we control Sam Gideon, a DARPA researcher who has in his favor a kind of armor called Augmented Reaction Suit, which in addition to allowing him to contact the command center, has a propulsion system that guarantees the user extreme agility.

For it is around the ARS that much of the gameplay revolves. At first the game may seem like a mere copy of other third-person shooters, such as the Gears of War series, however, everything happens so frantically in Vanquish that it’s easy to see its own identity.

Of course, here we also have the possibility of holding a button so that the camera approaches the protagonist’s shoulder and facilitates the aim or we can still hide behind walls and walls (which are mostly destructible) to escape enemy shots , however, the ability to slide through the scenarios thanks to stylish armor is something fantastic and that practically guarantees that we won’t be stuck in one place for too long.

In addition, whenever we take a lot of damage, the ARS puts us in an augmented reality mode, where the speed of the action around us is greatly reduced and thus allowing us to escape death more easily.

This frantic gameplay is without the slightest doubt the highlight of Vanquish and several times I felt like I was playing a modern version of the old arcade games, where what mattered were quick reflexes and trying to make it to the end of the stages alive, just to face a challenging boss and the process start all over again.

Robots, space warfare and a hail of bullets

It is true that with the exception of the final stretch, where some plot twists take place, the plot is not very deep, even though it is interesting, but another point that draws attention in Shinji Mikami’s creation is the graphics provided by a proprietary Platinum engine. Games and in this sense the setting deserves to be highlighted.

The weapon mentioned at the beginning of this analysis is a cylindrical space station called Providence, which was created by the Americans to capture sunlight and transform it into energy for the inhabitants of Earth. What the Russians did was concentrate that energy into a beam, turning it into a weapon of mass destruction and the whole adventure will take place there.

Although this suggests that we will only see metallic buildings for hours, the place is so big that it looks like a city, with lakes, forests and, of course, countless buildings to house its millions of inhabitants. The station was so well built by the team responsible for the game that we will always find a place that will leave us speechless.

Vanquish is a game that can be finished in about 7 hours, but its action is so intense that the campaign seems to last much longer, always providing us with unforgettable situations and very challenging parts. Maybe I run the risk of sounding a bit exaggerated, but for me this is already one of the best games of this generation, not because it features revolutionary mechanics or a very engaging story, but simply because it has one of the most fun gameplays in recent years.

A school of ninjas called Within the Blade